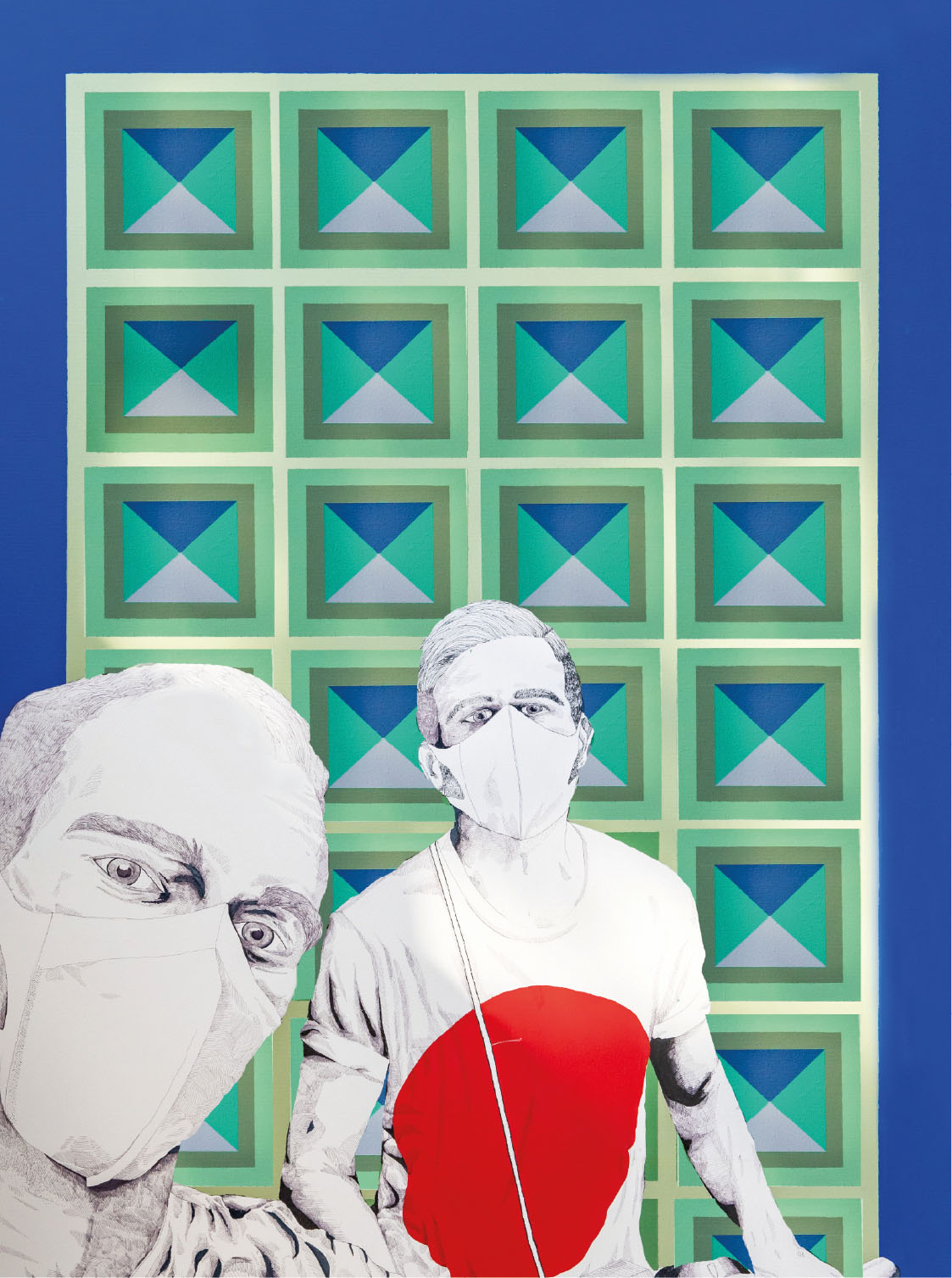 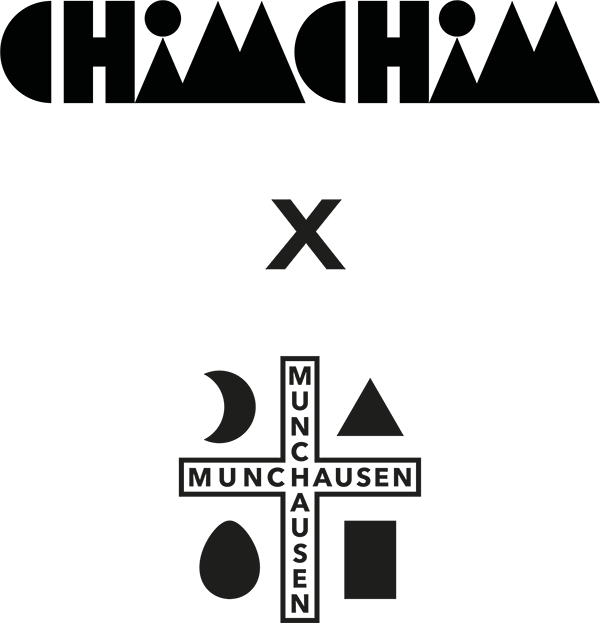 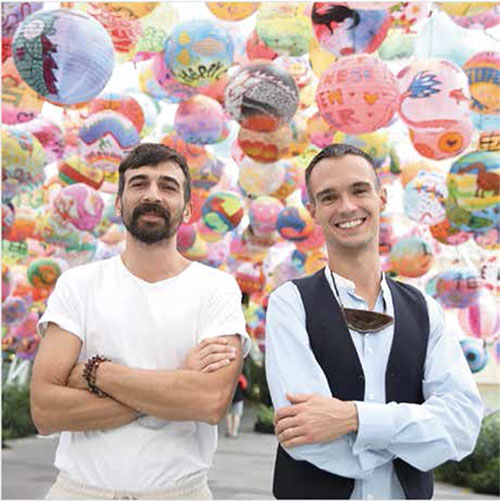 After moving to Thailand 3.5 years ago, Simon and Philippe took up painting as a way to pass the time, mostly transforming their Instagram adventures into bright and bold creations.

The resulting exhibition, ʻSouvenirsʼ, gathers those oil-on-canvas paintings and combines them with Thai crafts given the Munchausen treatment to offer a colourful vision of Thailand as seen through the eyes of two foreigners.

The roles are defined: Philippe draws and Simon paints. The finished artworks combine the figurative and the abstract, with not-quite-primary colours and geometric patterns which reflect the architecture on display throughout new and old Bangkok.

Among the moments captured: their first bike ride wearing anti-pollution masks near Chatuchak Market and Simon as a young kid dressed as Napoleon Bonaparte. Guest appearances come from Philippeʼs mother, their beloved labrador left at home, and even a certain Barack Obama. 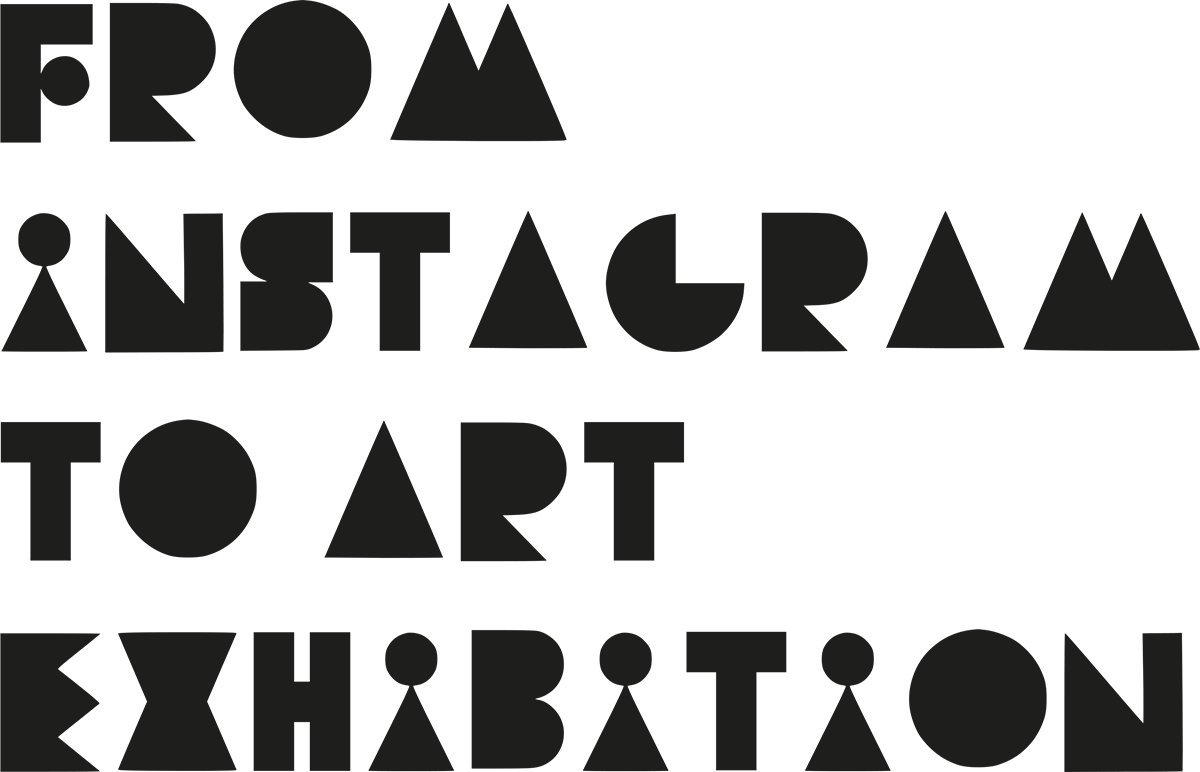 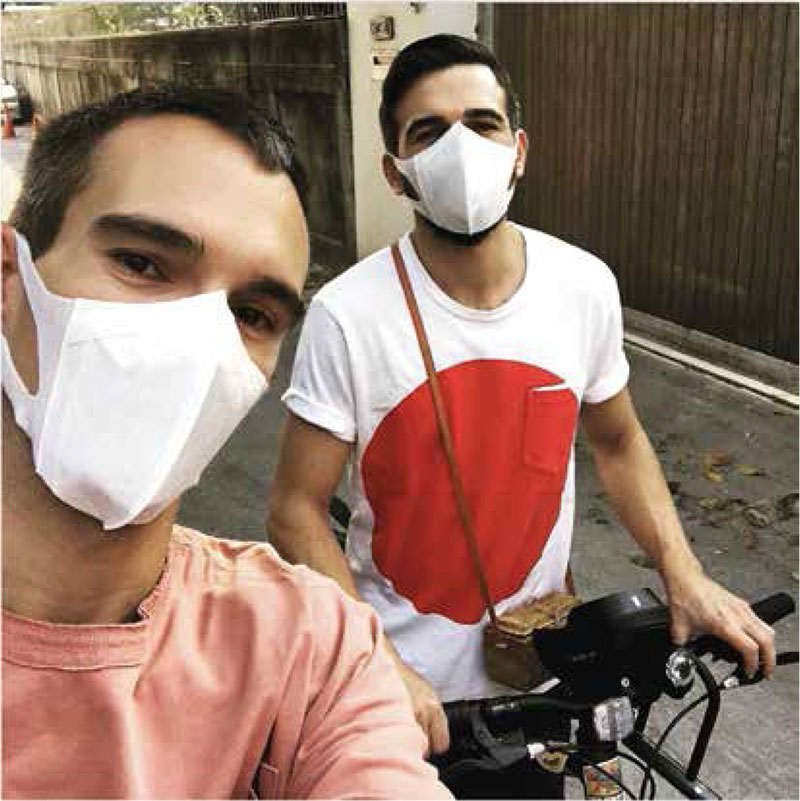 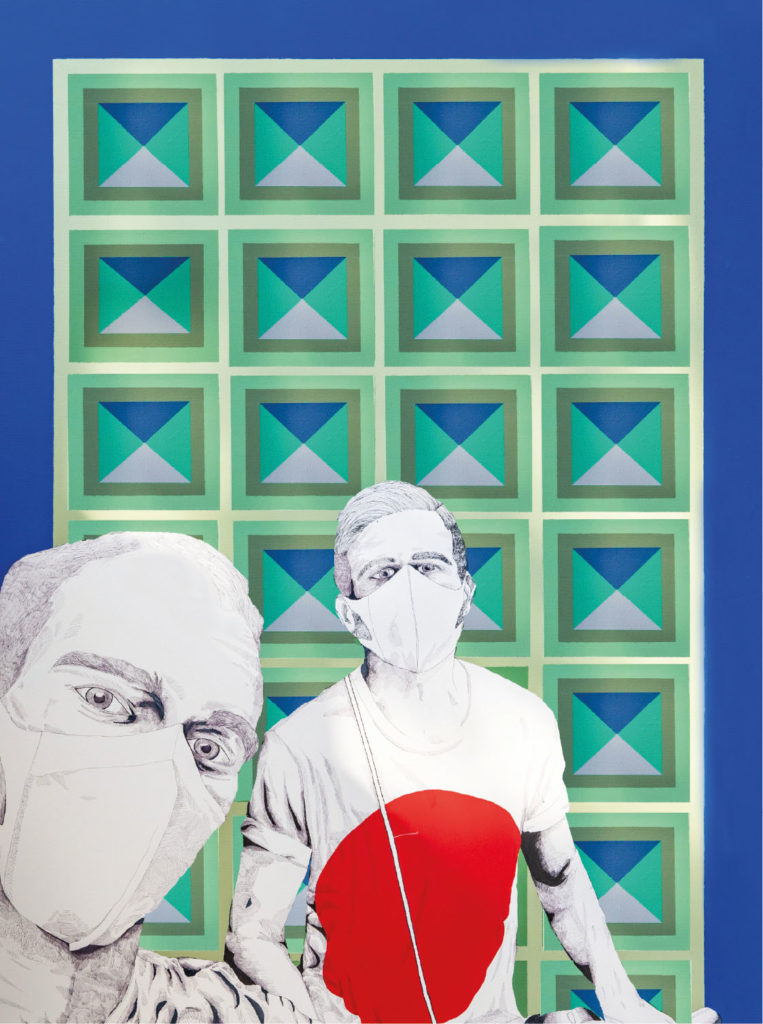 Biking with Masks
Simon says: “Two years ago, there was some really bad pollution. As Europeans, we were not used to wearing masks. We took a picture because it was so funny for us to wear a mask and bicycle in Bangkok, but with a Japanese T-shirt we bought in Tokyo.”

What’s the concept behind “Souvenirs”?

Philippe: “What’s interesting is there was no concept. None of the paintings are important [laughs]. There are no hidden meanings. We are just fascinated by Instagram and how it allows us to build up a type of curated memory. These are some of our favourite memories.”

Simon: “Our approach is more like a laboratory, actually. Whenever we have something with free lines, we’ll balance it with a geometric pattern. If it’s too colourful, it’s like an overdose and you can’t appreciate the colour.”

Philippe: “We call it ‘Souvenirs’ because it’s our memories of France mixed with Thai arts and crafts. As a foreigner when you first arrive in Thailand you are really impressed by these pieces.

We would walk around and be like, “Oh my god, to get this in Europe would cost you a lot!” 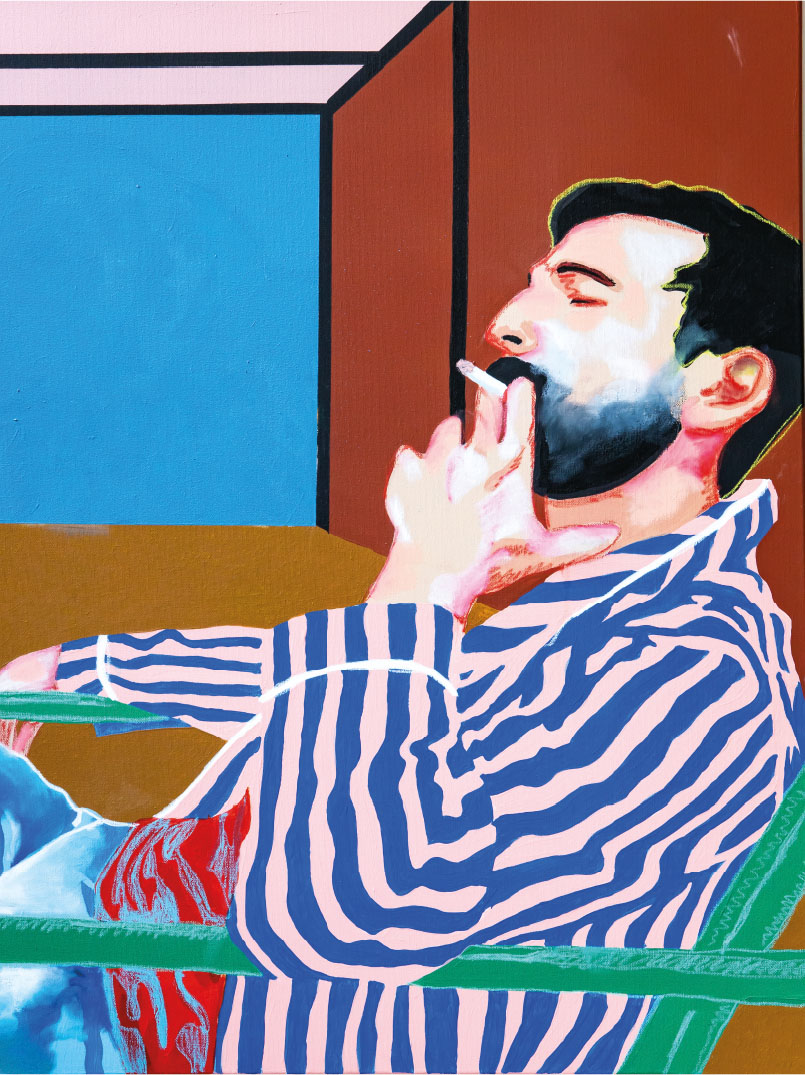 Philippe Smoking
Simon says: “We miss our home in the south of France. This photo is a reminder of family times and was taken during the holidays before coming to Bangkok.” 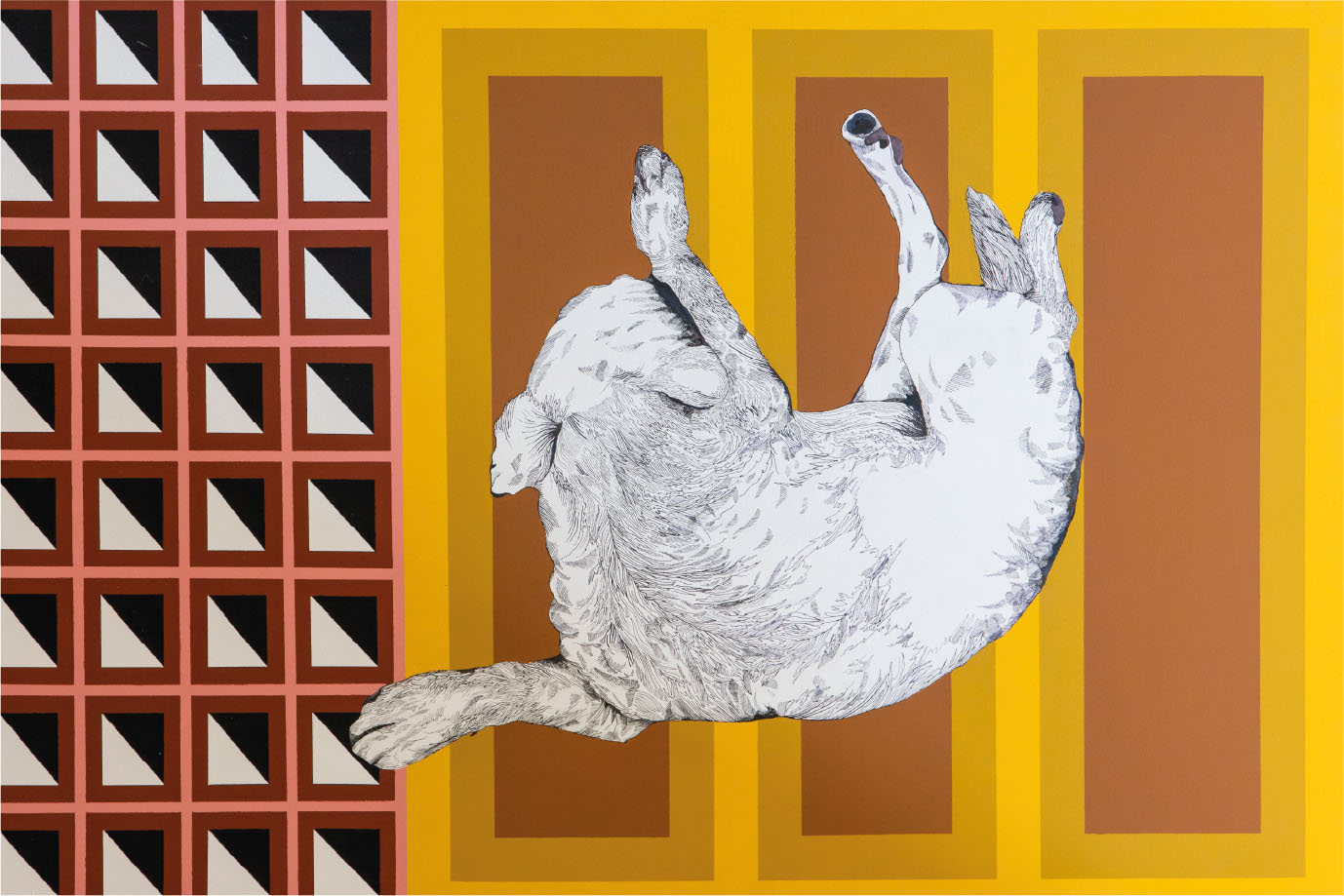 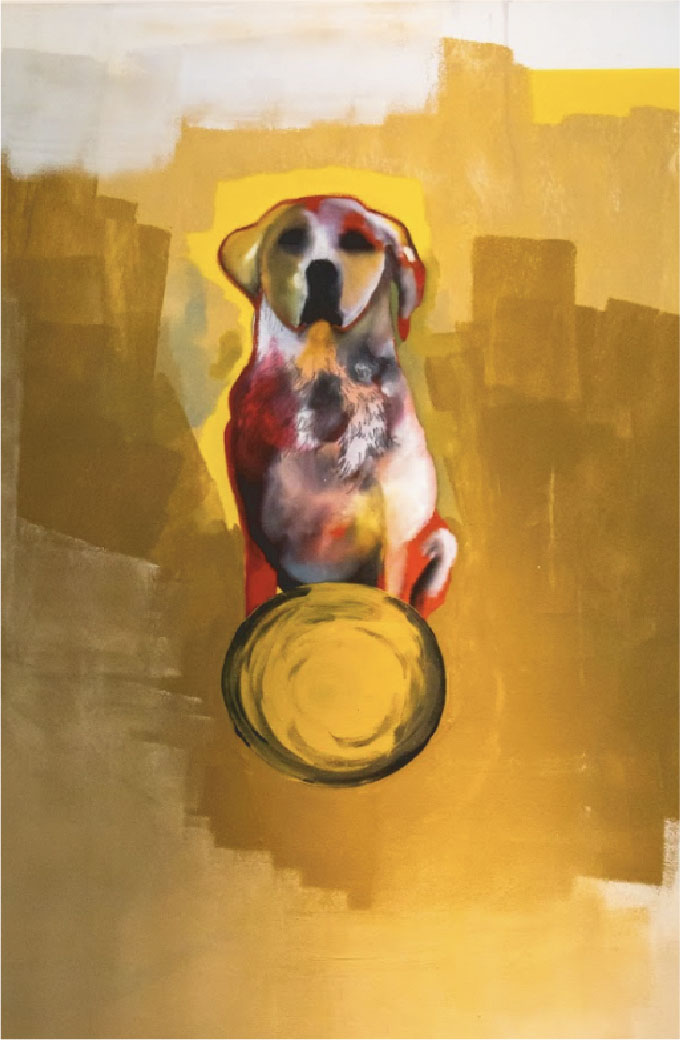 Ernestine the Labrador 1 & 2
Simon says: “This is our dog, who we had to leave in France. Sheʼs the nicest dog in the world. We just wanted a reminder of her strange poses and puppy dog eyes!” 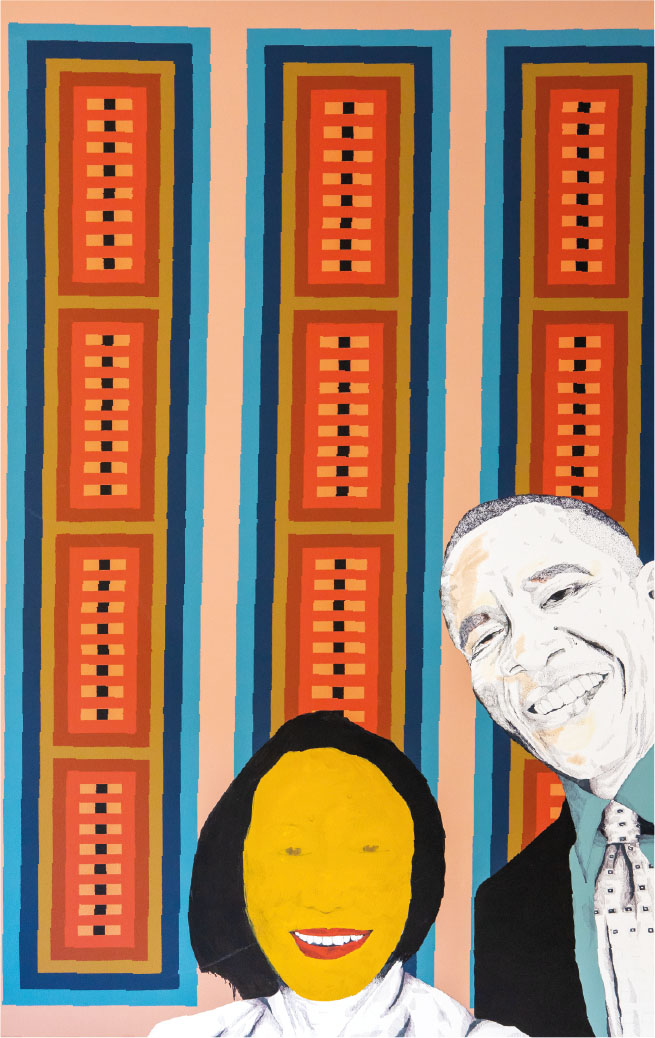 Friend with Barack Obama
Philipe says: “Our friend met Obama last year. We loved this picture very much, so we thought letʼs do a portrait of her with Obama.” 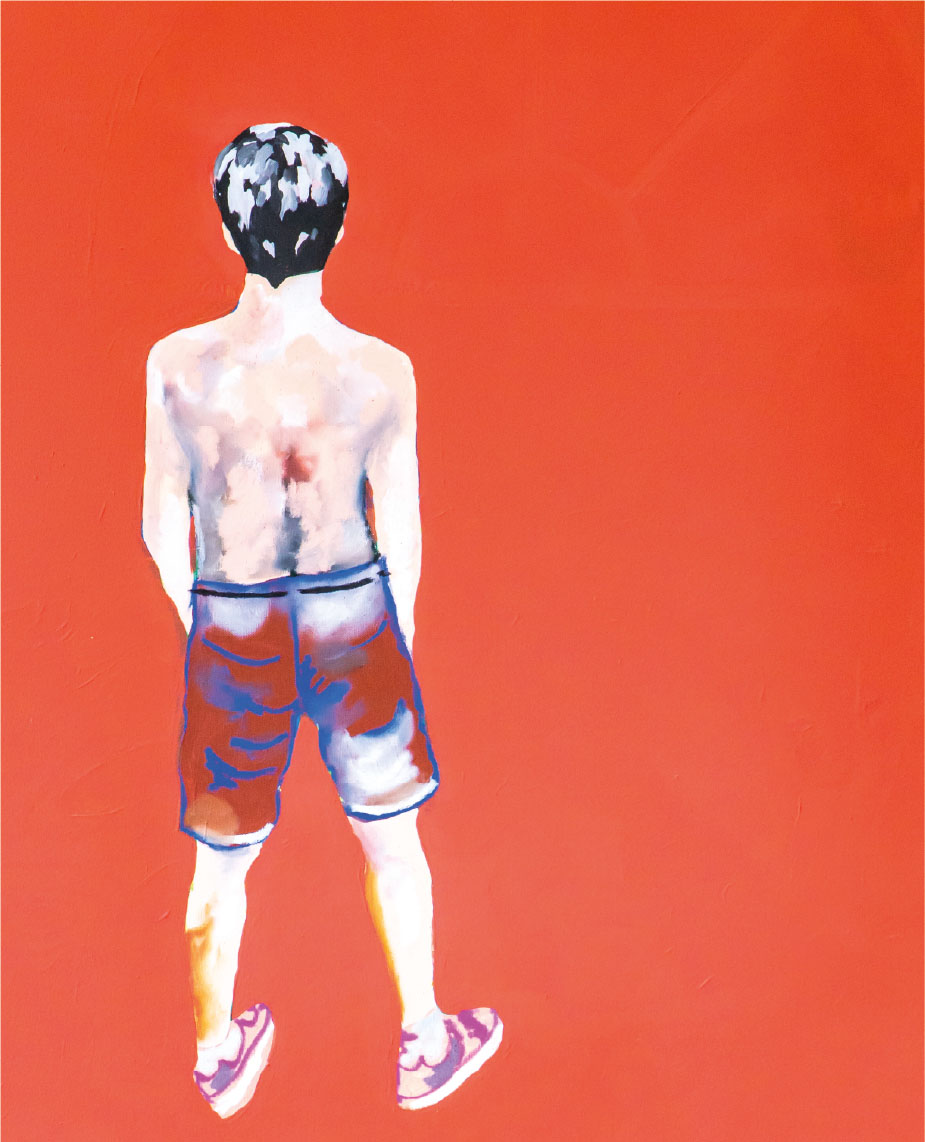 Nephew by the River
Simon says: “Our house in the south of France is next to a river and my nephew was looking into the water. I chose red for the background just to match the shorts. There is no mystique.” 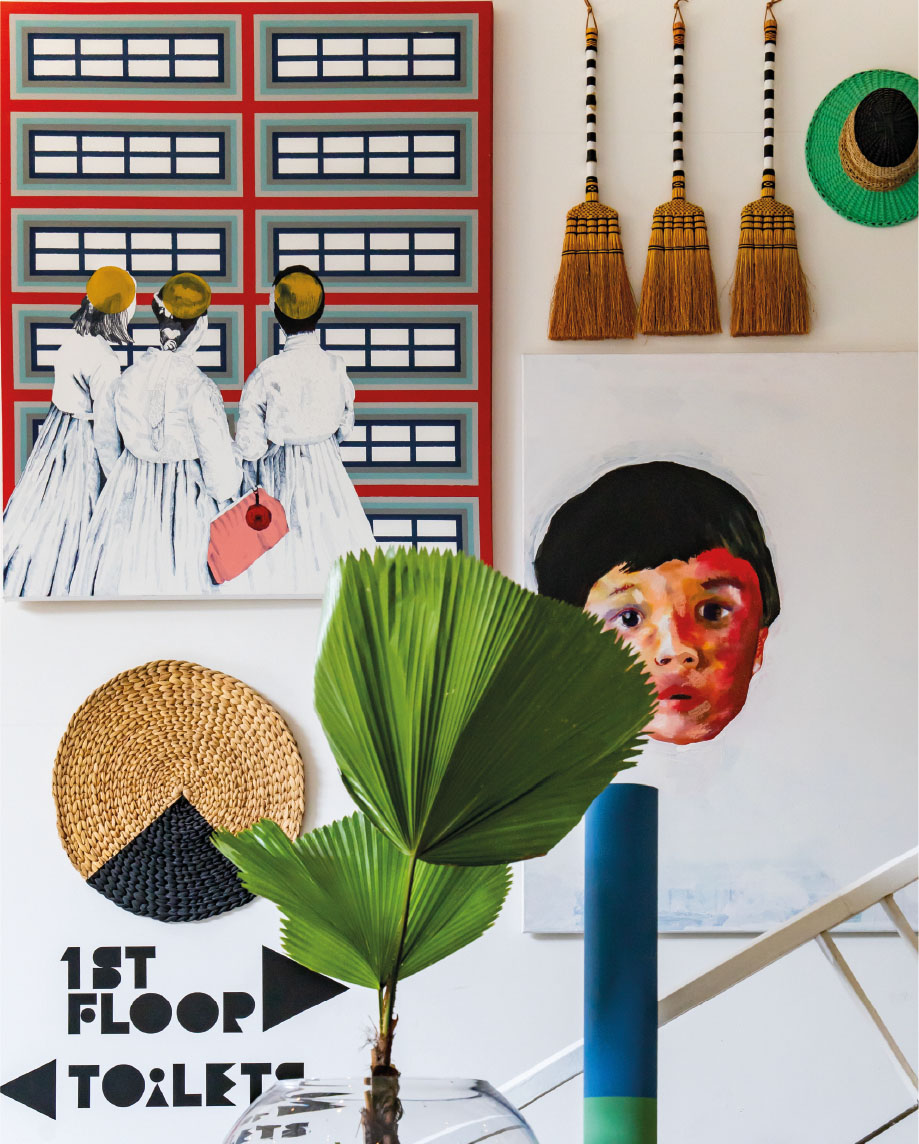 Korean Girls
Simon says: “This photo was taken at the royal palace in Seoul. There were many girls taking pictures in rented traditional costumes, but then they would still have their Chanel bag and iPhone. It was very anachronistic.”

Young Simon
Simon says: “This is me when I was young based on an old photo I found.”

"Our work is about balancing order and chaos; mixing and matching. What we love about Bangkok is that it's messy but charming — there's an element of mix-and-match, but not everything matches." 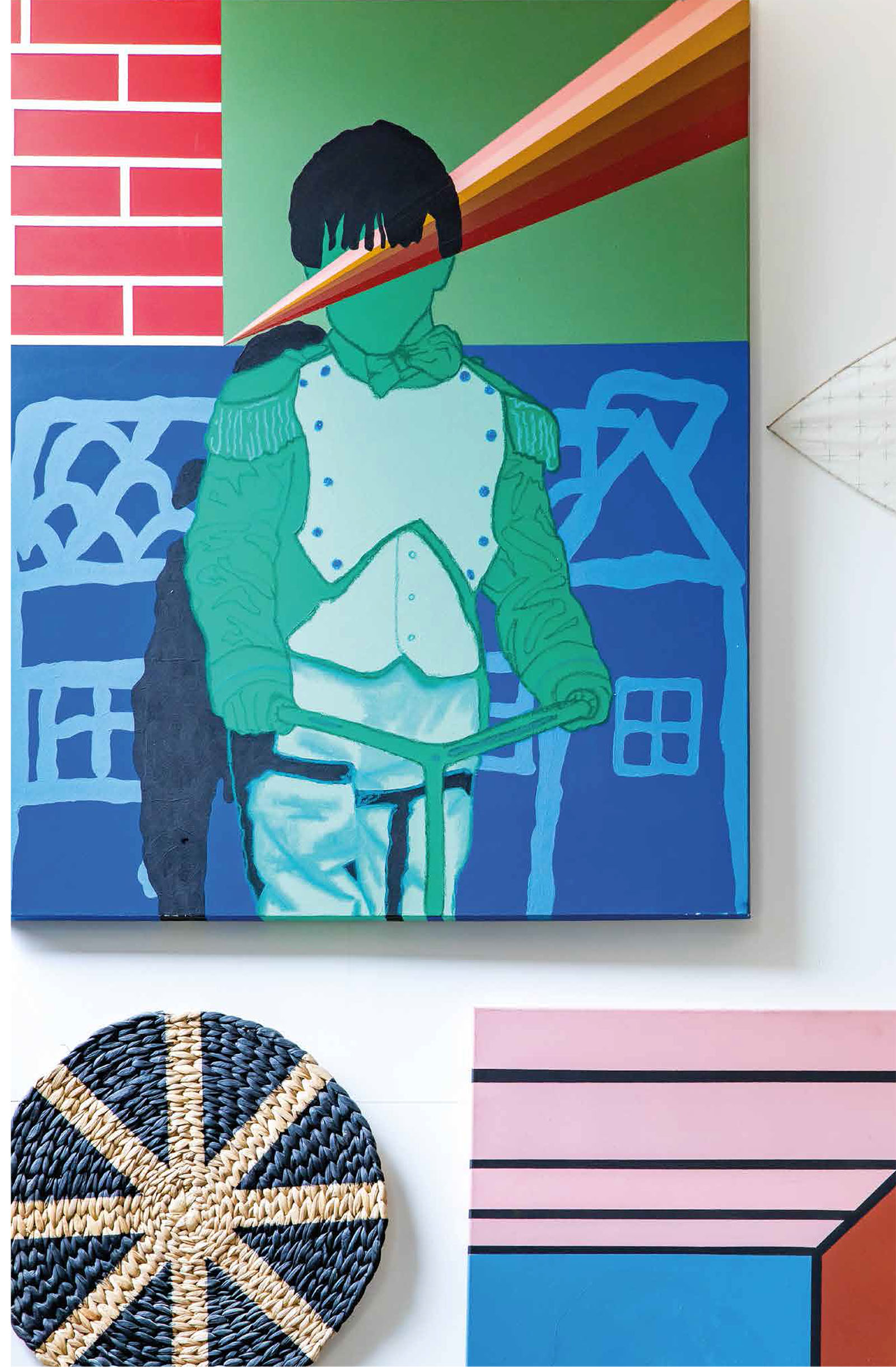 Young Simon Dressed as Napoleon Bonaparte
Philippe says: “It’s common for kids to dress up as the French military leader. It’s a strong memory for Simon and a picture he wanted to take in an abstract direction.”

“We don’t do art for art. We don’t think of ourselves as artists, but rather as creative people who design,” Simon says.

While this is the pair’s first official exhibition, both have a wealth of experience in France’s fashion and design worlds — Simon picked up a love of pop culture from eight years on
the design team of French brand Castelbajac, while Philippe spent considerable time at the storied Le Bon Marché Department Store in Paris, among other roles.

Together as Munchausen theyʼve had brushes with viral fame. Firstly, through a line of stickers which make even the simplest lamp look extravagant by suggesting the shadow of a chandelier, and then with the Munchausen Lego kitchen, which featured an IKEA kitchen island covered in more than 20,000 Lego pieces.

The duo takes its name from Baron von Münchhausen, a quasi-fictional, 18th-century German nobleman and explorer whose tall tales became the inspiration for many films, including Terry Gilliamʼs 1989 comedy.

“The name suits us well as the stories of Munchausen were something all people of our age grew up with, either from movies or bedtime tales,” Philippe explains. “Simon is the more pop side of our duo, while I’m more historical or old-fashioned. Munchausen is our common ground.” 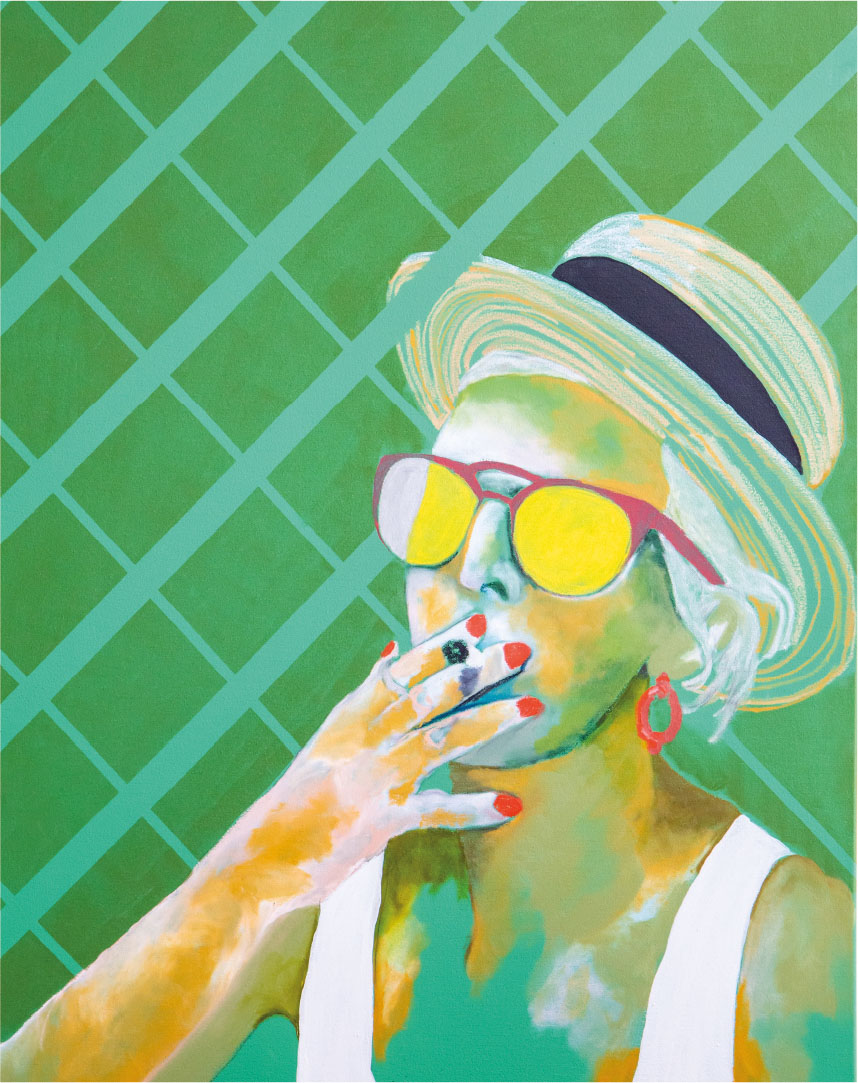 Philippe’s Mother
Philippe says: “This photo feels iconic of summer. We sent the photo to my mother and she said, “Oh my god, why did you take.

Chim Chim was designed as a white box — a space for local and international artists to show off their multimedia works. Think of us as a restaurant that’s also as an artists’ loft.

Our flexible space presents a clean canvas for a diverse display of creativity. Upstairs, our workshop encourages interaction between resident artists and the public.

Are you an artist looking to showcase your work? Chim Chim is open for proposals and residencies all year-round. This could be the start of a beautiful relationship. 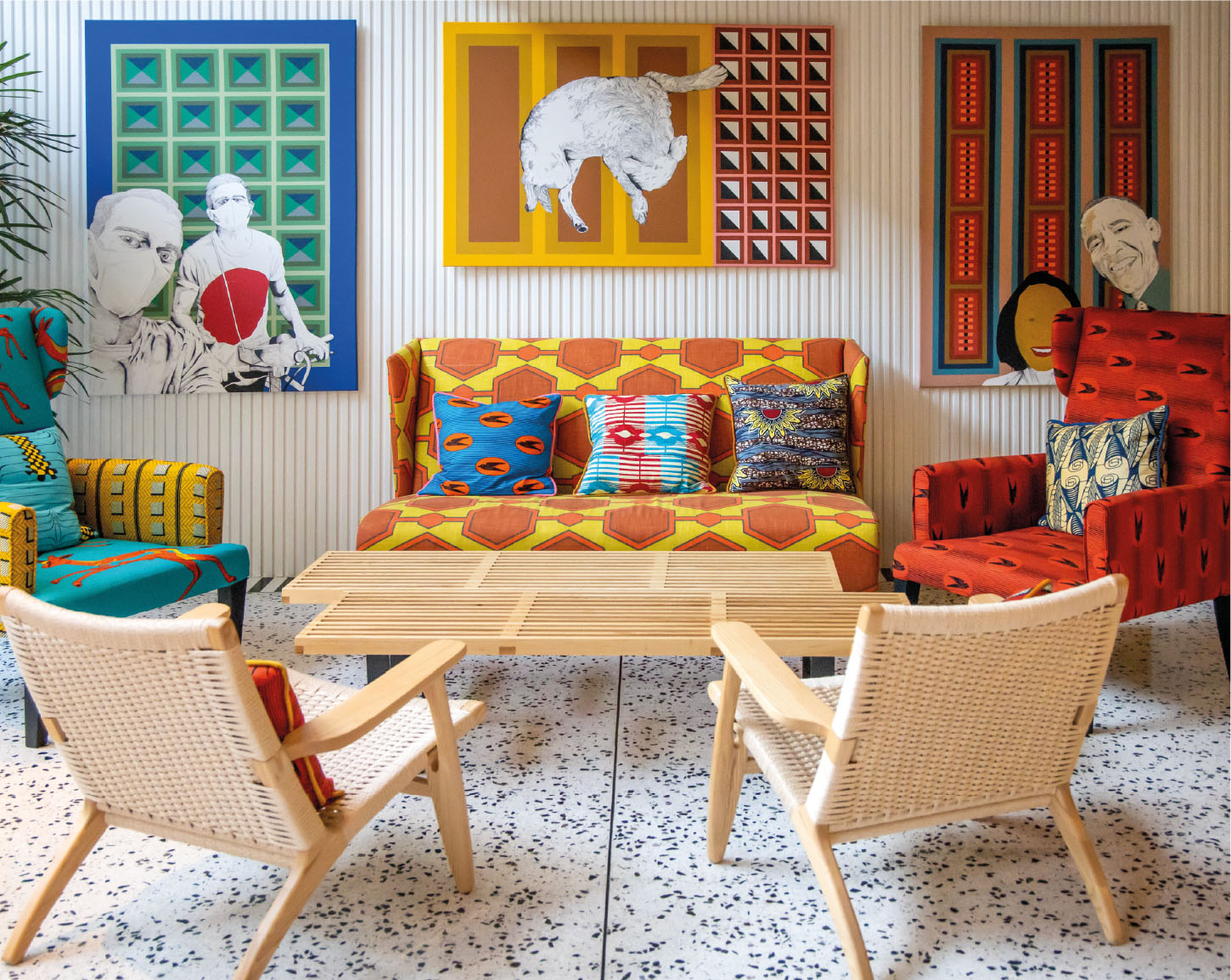 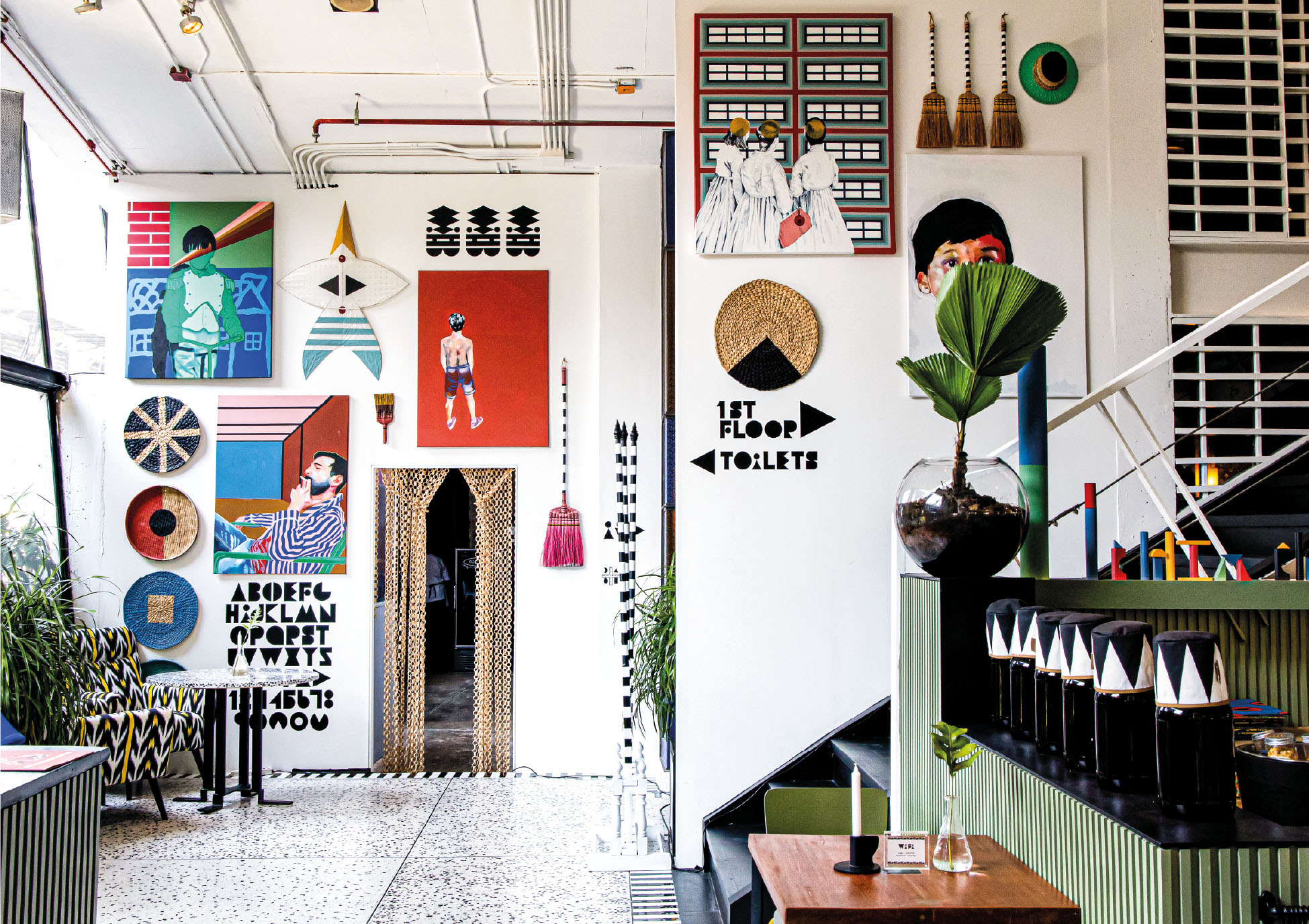 drop us a line

Enjoy free delivery within 5 kms when ordering direct with us!
( minimum spend at THB 1,000 ) 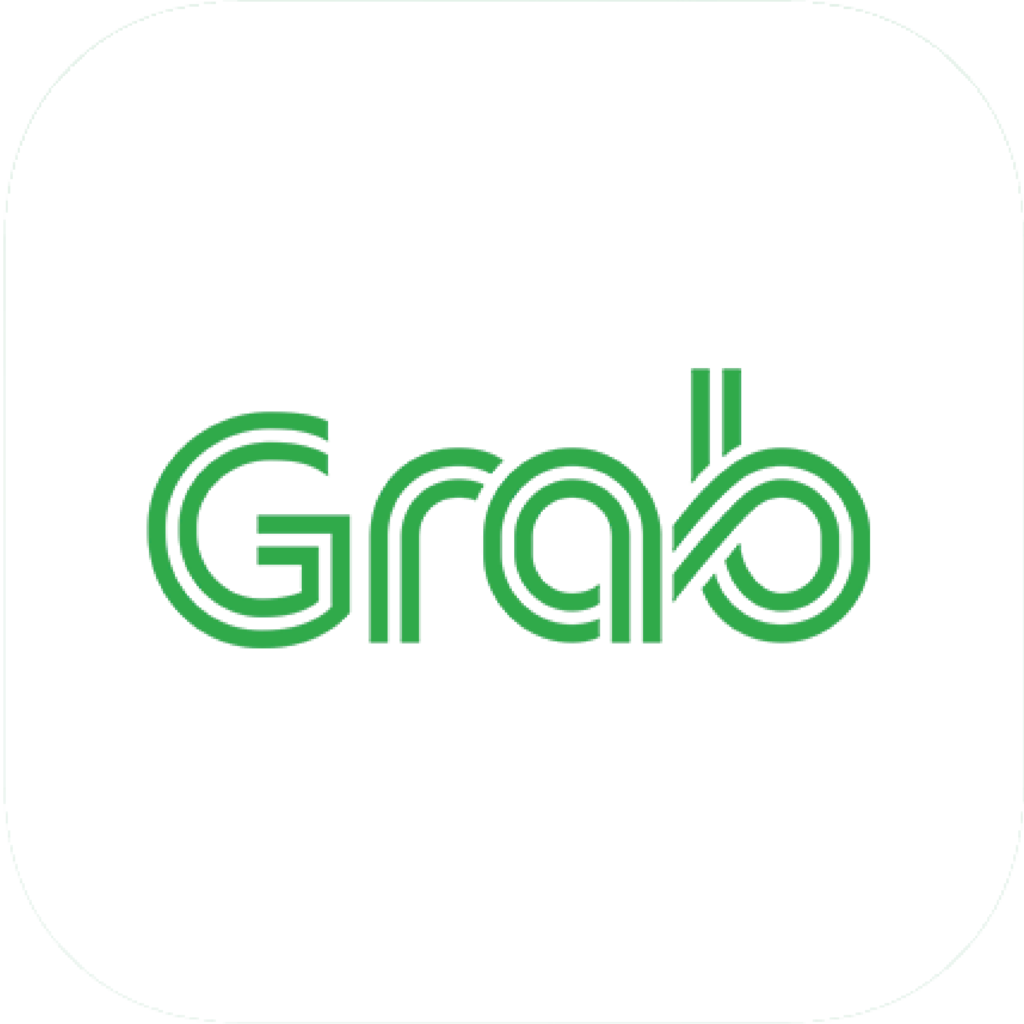 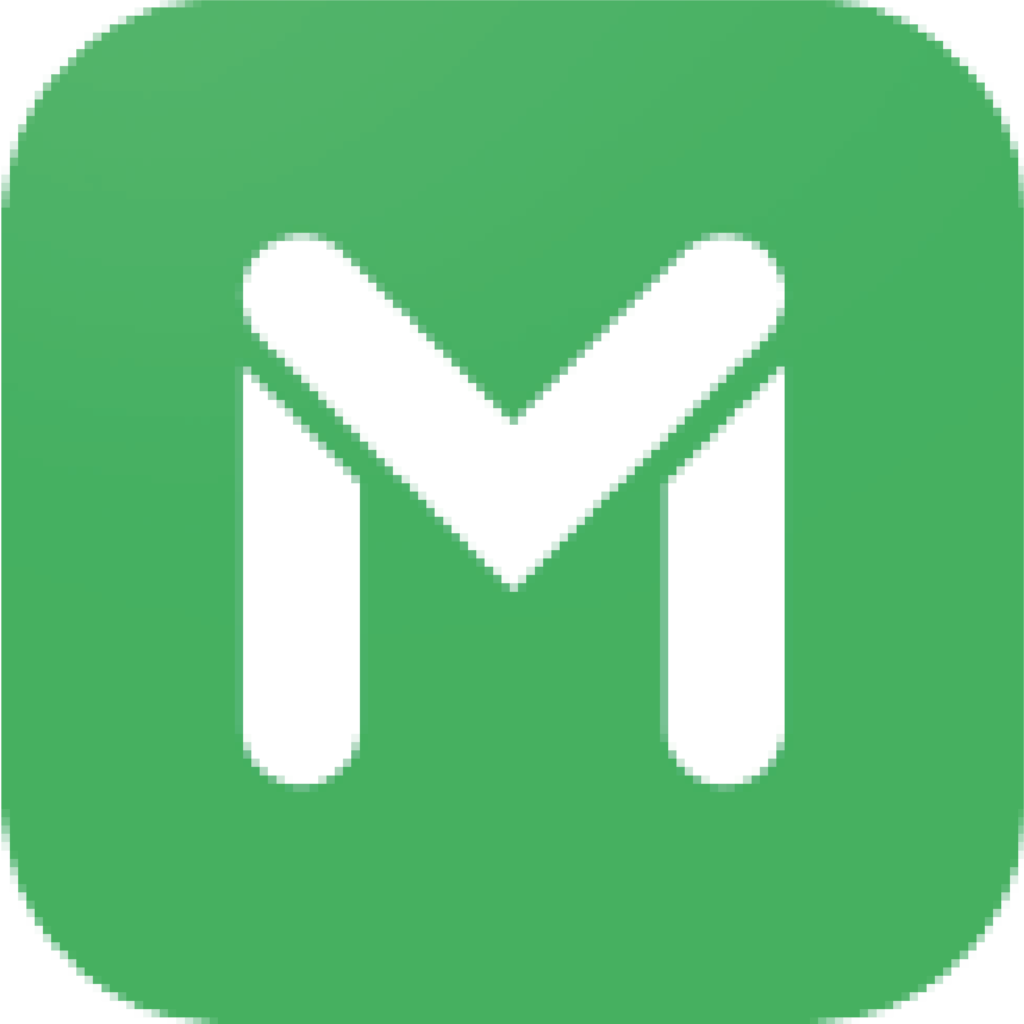